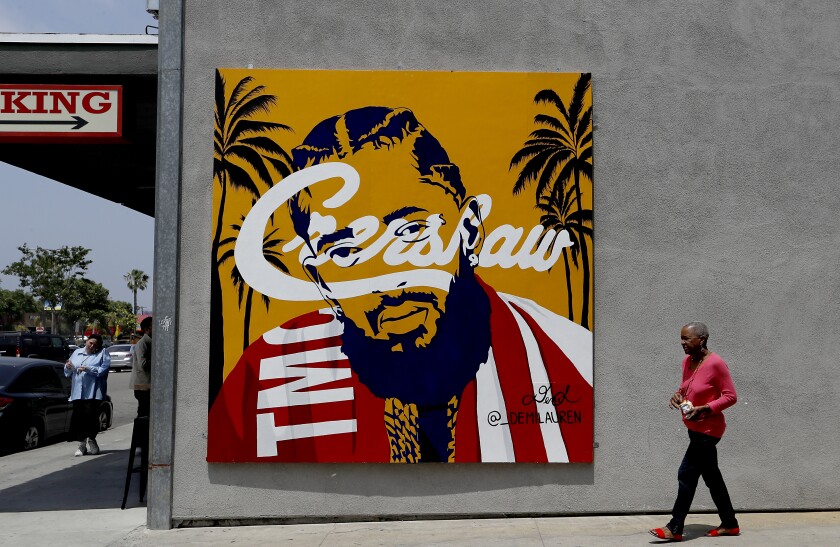 How a gentrifying Leimert Park is ending up in Black hands

As it turns out, nothing about buying back the ’hood to build generational wealth and manage gentrification — as the late rapper Nipsey Hussle so famously encouraged his fans to do — is easy when you’re Black.

Not even buying one small corner of it.

For about a year, I’ve been following the travails of Akil West, a Black business owner with dreams of purchasing, co-op-style, a small commercial building on Degnan Boulevard in the heart of rapidly gentrifying Leimert Park.

Though dilapidated, the building — home to West’s clothing store, Sole Folks, and several other Black-owned businesses, including Eso Won Books — is clearly valuable, mostly because of where it sits: at the center of Black life in Los Angeles.

Now Metro is on the verge of opening a stop on the newly built Crenshaw Line just around the corner. And at the end of the block, the renovation of the famed Vision Theatre is almost complete.

Add to that L.A.’s notoriously speculative real estate market, and corporate developers and fly-by-night investors have been circling. The risk of displacement has never been more real for longtime residents and business owners.

And so, to turn his dream of community ownership into anything resembling reality, West has had to fight. Fight for financing. Fight to be taken seriously. Fight the slumlord who waffled about selling the building. Fight some of the tenants who had different ideas about how to proceed. And even fight some of the very Leimert Park residents he hopes to help.

The $2-million loan, coupled with previous financial commitments from Wells Fargo, Snap Foundation and the nonprofit community lender Genesis LA, will be enough to complete the $6.5-million purchase of the building on Degnan Boulevard.

“Basically, there’s been a mountain of skepticism across the board that we’ve had to deal with,” Walker told me before the vote. “Now I think that skepticism has completely washed away. It’s inevitable.”

Well, mostly inevitable. The supervisors instructed the county’s director of economic opportunity to vet the deal and relevant stakeholders before releasing any funds.

But assuming everything is on the up and up, this deal puts a crucial corner of Leimert Park in Black hands.

In addition to West, in control of the land trust are three of the seven tenants in the Degnan Boulevard building, including Adrian Dove of the Congress of Racial Equality of California, Ade Neff of Ride On! Bike Shop/Co-Op and Tony Jolly of Hot and Cool Cafe.

That, in and of itself, won’t prevent gentrification. The broader market pressures driving speculation and sky-high housing prices in Leimert Park are likely to remain, give or take a recession.

But what this deal will do is allow West and the other business owners to navigate that gentrification from a position of power — and do it at the front end rather than after the fact, which is what too often happens in communities of color. It’s all about ownership.

“L.A. County is home to 1.3 million small businesses, close to 60% of which are owned by and operated by people of color,” she said during Tuesday’s meeting. “And we know that the rising cost of commercial rent is a critical challenge.”

Under the program, none of the businesses on Degnan Boulevard — even the ones that aren’t in the land trust — can be forced out. Rent increases are capped and some of the money from the loan will go toward making immediate repairs.

Still, not everyone in Leimert Park is happy about the Board of Supervisors blessing West and his land trust.

Rumors are swirling in Leimert Park about West, his character and his plans for the building on Degnan Boulevard. Some are predicting that market-rate apartments are on the way. Others insist that the businesses would be forced to close.

Before the vote, one person even called to warn the supervisors that approving the pilot program would send “a message that developers can carefully come into any institution with a plan for redevelopment, legally evict those that disagree with that plan and move forward with gentrification of the neighborhood.”

Mitchell was unmoved and unbothered.

Instead, she clarified that not only are there no immediate plans to redevelop the building on Degnan Boulevard. But even if that does happen, the land trust would be required to provide commercial and residential spaces at below-market rents. Plus, there would have to be “a robust community engagement process.”

Everything else is just erroneous speculation.

“I was born and raised in Leimert Park and Leimert Park has struggled for a long time,” Mitchell told me. “I have seen the closure of amazing businesses, and folks couldn’t pay the rent. There’s been a long history of conflict and I look at this as an opportunity.”

For West, with the supervisors’ unanimous vote in favor of the pilot program, the hardest part is over.

On Monday morning, the day before the vote, he sat hunched over at Harun Coffee, across Degnan Boulevard from the building he will soon own. He was stressed out, frustrated and exhausted.

It shouldn’t have to be this hard.

Across the United States, the average Black household is worth just 12 cents for every $1 the average white household is worth. It’s a persistent gap that goes back to the decades of redlining and restrictive covenants that prevented Black Americans from buying property and building generational wealth.

But consistently low rates of homeownership and a lack of access to capital have made doing so nearly impossible. The U.S. Federal Reserve found that Black entrepreneurs are denied loans nearly twice as often as white entrepreneurs, and when approved, pay higher interest rates.

Knowing all of this has fueled West’s plans for the building on Degnan Boulevard.

He wants to turn the building into a live/work, artist-focused complex with apartments, ground-floor commercial space and a rooftop restaurant.

“We want to create spaces where we can actually teach our community how to raise money and how to develop entrepreneurial programs,” he said.

The second floor would have small retail spaces. It would also include small commercial kitchens so people who normally sell food on the street could try out a bricks-and-mortar space to expand their businesses.

“I think it’s notable to create a space that’s designed for actual entrepreneurs who’ve been out here grinding,” West told me.

Any future plans to redevelop the building would require the approval of multiple people. But Walker, who has worked on several high-profile projects in Los Angeles, has no doubt it can be done and is excited about the possibilities.

“Ownership,” she added, “is important.”