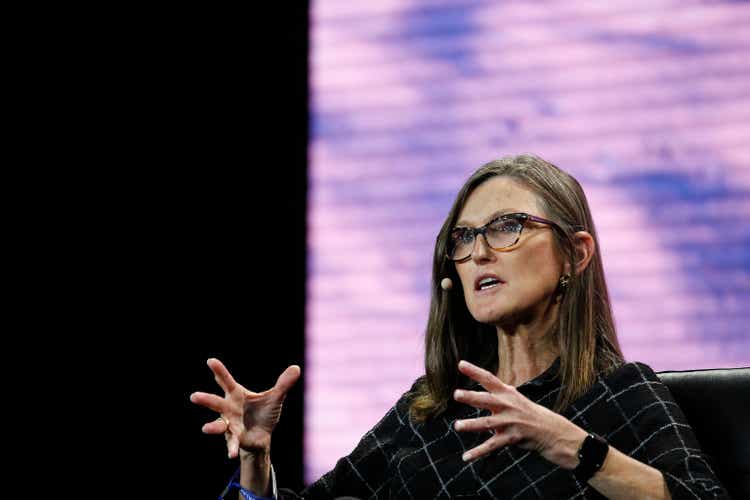 Forget ARKK ETF: Invest In Tech With These 2 High Yielders

In this article, we take a look at two different ways to gain exposure to this higher risk, higher reward segment of the economy:

ARKK is an active ETF with fairly high turnover and an expense ratio of 0.75% that falls somewhere between what is charged by passive and actively managed funds.

The ETF typically holds between 35 and 55 stocks with a median market cap of about $5 billion, but there is a fairly wide variety of company sizes within the portfolio. Though all holdings could be considered “innovation” or “cutting-edge tech” companies, they operate across a range of fields/industries:

ARKK is a long-only, equity-only ETF that focuses on innovative (and typically newly IPO’d) publicly traded companies. Sometimes these companies are profitable and sometimes not, but a large portion of them remain in cash burn mode as they continue to invest for growth.

On the other hand, HTGC and TRIN are BDCs that specialize in venture debt – specialty loans typically 2-4 years in term for fast-growing private companies that are not yet profitable but are backed by venture capital funds. Moreover, they often co-invest by taking equity stakes or warrants in their portfolio companies to gain exposure to high returns from the handful that turn out to be big winners.

These are largely the same types of companies that would be owned by the ARKK ETF, only they are still private and have not yet completed an IPO. The IPO is one of the potential liquidity events that can lead to the final return of capital (and ideally return on invested capital) for the likes of HTGC and TRIN.

In some cases, ARKK may even be providing the liquidity by buying shares of tech company IPOs. As such, it’s important to recognize that ARKK invests in the same types of companies, generally speaking, as HTGC and TRIN, only ones that are further in their early growth process toward profitability.

Here are some examples of TRIN’s portfolio investments, and for many if not most of these the company also had equity exposure:

And here are some examples from HTGC’s portfolio, specifically equity and warrant holdings:

From the stock investor’s perspective, it’s important to note the difference in primary sources of returns from each investment.

Let’s compare ARKK to HTGC and TRIN to see why investors might choose the BDCs over Cathie Wood’s popular ETF.

Even so, ARKK’s median stock holding market cap of $5 billion is multiple times larger than HTGC’s market cap of $1.7 billion or TRIN’s ~$550 million.

Clearly, ARKK is the more popular investment. Indeed, it became a phenomenon in the financial world during the pandemic as its grouping of high-tech stocks benefited from the stay-at-home trend and its chief spokeswoman Cathie Wood became an oft-interviewed oracle on financial media.

And yet, the massive surge in stock-picking success and capital inflows ARKK enjoyed for the 10-11 months after the beginning of the pandemic proved short-lived as ARKK has completely retraced its steps back to its pre-pandemic level – below it, in fact. Year-to-date, ARKK seems to have flatlined after an over 50% loss.

Compare this to the price performance of HTGC and TRIN, which have also lost value but not nearly to the same degree as ARKK.

Zooming further out, we find that ARKK has severely underperformed HTGC and TRIN on a price basis alone since TRIN’s debut on the public markets in January 2021.

But price obviously doesn’t tell the full story, because the primary source of returns for HTGC and TRIN is dividends. When we factor in dividends to arrive at a total return comparison, we find that the performance difference between the BDCs and ARKK since TRIN’s IPO becomes even more extreme.

Omitting TRIN in order to go further back with a head-to-head comparison of ARKK and HTGC over the last five years, we find that HTGC outperformed, even after ARKK’s huge gains during the pandemic and HTGC’s 25% stock price drop over the last several months.

Once the bear market is over, however, should investors expect ARKK to resume its massive outperformance?

There are some reasons to believe it might. Due to Cathie Wood’s outspoken defense of her strategy and investors fear of missing out on another rally, ARKK could enjoy a strong rebound coming out of the current bear market.

Then again, the massive surge ARKK enjoyed during the pandemic should also be seen as a one-time event that is highly unlikely to repeat. ARKK benefited from the stay-at-home mandates and social distancing as well as the pandemic-era stimulus money that people used to gamble in the stock market. That fad is over. And we likely won’t have another once-in-a-century pandemic for a while.

What’s more, as interest rates rise, investors place greater value on current earnings rather than expected earnings to come far in the future, as is the case for ARKK’s holdings.

For HTGC, the percentage of floating rate loans reaches nearly 95%:

Moreover, both BDCs have interest rate floors in their loans, which minimizes the downside from falling rates. Generally speaking, these loans are the best of both worlds, as the downside of floating rates is limited while the upside is potentially huge.

For all early growth companies that are still in cash burn mode as they invest to expand their business, there is a constant need to raise more and more capital. That becomes a problem when the capital markets are drying up and money is becoming scarcer.

Without the ability to raise capital at reasonable prices, startup growth companies can easily run into trouble.

Is that a bigger problem for venture capital lenders like HTGC and TRIN or equity investors like ARKK?

I would argue that it is a bigger problem for the equity investor side, because the inability to raise reasonably priced capital can severely impair early growth companies’ capacity to grow, which then should result in poor stock price performance. This then translates into poor price performance for ARKK.

On the other hand, venture lenders like HTGC and TRIN are in a stronger position, because venture-backed companies will prioritize servicing their existing obligations to prevent defaulting. Preventing defaults or going into bankruptcy is almost always preferable to any other option.

Of course, when the capital markets dry up, exits of equity or warrant holdings may have to wait or else produce lower than hoped returns. But this is a relatively minor portion of the total returns generated by the venture debt business model practiced by HTGC and TRIN.

Cathie Wood is no doubt a smart person with a keen eye for innovative technology. Her research department is among the finest at not only identifying technological trends but also capturing investors’ imaginations and interest. It is not surprising that her confident, unwavering, and prolific marketing of ARK Invest has borne fruit in recent years.

But it seems unlikely that her flagship ETF, ARKK, will enjoy another massive surge coming out of the current malaise as it did during the pandemic. COVID-19 created a highly beneficial environment for ARKK to soar, and those unique circumstances are unlikely to repeat again anytime soon.

However, investors have the opportunity to invest in substantially similar (often the same) companies as those ARKK holds while enjoying greater stability, less downside risk, some upside opportunities from equity and warrant exposure to portfolio companies, and quarterly cash returns in the form of dividends.

It feels great to invest in the American innovation machine, and at High Yield Investor we are eager to earn strong returns while participating in human advancement. But there is more than one way to do that. Investors looking for high yields and relatively low volatility would do well to do a deep dive into HTGC and TRIN.