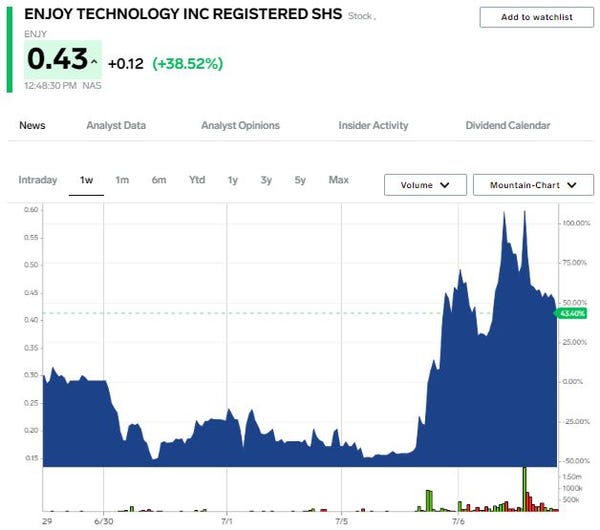 Shares of Enjoy Technology extended a two-day rally to as much as 400% on Wednesday after the at-home retailer filed for Chapter 11 bankruptcy last week.

The price action makes Enjoy the latest company to file for bankruptcy and subsequently see its stock price soar, with investors betting that there may be a deal that doesn’t wipeout 100% of the equity, as typically happens during bankruptcy proceedings.

Most recently, Revlon stock soared more than 650% from its post-bankruptcy filing low, following in the footsteps of Hertz, which originally set the trend of retail investors sending stocks through the roof despite imminent bankruptcy rulings.

less than a year ago. Enjoy’s service was centered around a tech specialist delivering technology products to consumers at their homes, as well as helping them with setup and configuration.

But lackluster sales, failures to rein in costs, and an inability to raise cash by selling more stock amid a painful

means Enjoy is now on the road to reorganizing its capital structure in bankruptcy court.

The question is if Enjoy’s equity holders will be left with anything after the bankruptcy proceedings, or if they’ll be completely wiped out as the company prioritizes paying back debt holders, as usually happens in bankruptcy. For now, retail investors are betting there might just be some equity value remaining in the company.

But that’s probably not a smart bet, as Enjoy said it has already reached an agreement to sell most of its assets to a device insurance company named Asurion, LLC. Asurion has agreed to provide Enjoy with a $55 million loan to fund the company through its bankruptcy.

Enjoy also said that it expects Asurion’s bid to be enough money to pay back all of its secured and unsecured creditors in full, but it did not mention the fate of current equity holders.