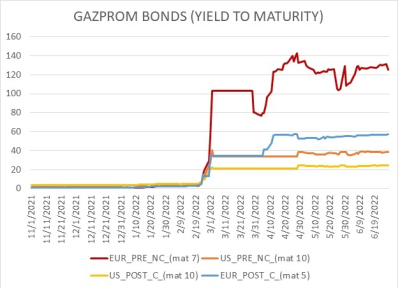 We have written before about the “Alternative Payment Currency” clause in some Russian bonds, the one that allows for payment in rubles if, for “reasons beyond its control,” the government can’t pay in dollars or euros (or a subset of alternative currencies). Our general take on the clause was that it is a bit odious. That’s because we viewed it as way for investors to subsidize bad behavior by the Russian government. If the Russian government gets sanctioned, investors will help it out by taking on the currency risk associated with being paid in rubles. And we were not the only ones. Jonathan Wheatley of the FT, writing in 2018, when these clauses were introduced, quoted an investor this way:

“I cannot understand why any foreigner would take the risk of being paid out in roubles,” said one London-based asset manager, adding that many foreigners were likely to buy the bonds without reading the prospectus thoroughly.

Gazprom, the Russian state-owned gas producing giant, also began using these ruble option clauses in its foreign currency bonds at roughly the same time (here). Importantly, for our purposes, it was clear to all involved at the outset that these clauses were put in place in anticipation of western sanctions in the event that Russia were to engage in misbehavior (e.g., invading neighbors).

From first principles, we would have assumed a bond with this APC clause would be viewed as relatively unattractive compared to a bond that required payment in dollars or euros. Bonds denominated in foreign currency protect investors from the risk of devaluation in the borrower’s currency. If investors are less willing to lend in domestic currency, that should make the cost of borrowing in foreign currency lower. If one looks at broad trends over time, that’s mostly what we see. Poorer and lower-rated countries do seem to pay more to borrow in local currency than in foreign currency (here). By contrast, rich, highly-rated sovereign issuers borrow pretty much only in their local currency.

Moreover, the APC clause could be invoked opportunistically by the Russian government in circumstances where it isn’t actually impossible to pay investors in hard currency. That risk is probably small for a country with a long-standing reputation for good behavior vis-à-vis its obligations to the rest of the world such as the Netherlands or Germany.  But would anyone put Russia in that category, especially Russia under Putin after its repeated and extreme violations of international obligations? A clause that allows misbehavior by a counterparty known for its willingness to misbehave should make these bonds less valuable. Indeed, we’ve seen just that with Argentina after it engages in shenanigans vis-à-vis bondholders (here).

Given these principles, here is what we would have predicted:

As a backdrop, financial economists find that probabilistic information about the future impact of a conflict tends to be quickly incorporated into asset prices (e.g., here, here, here and here). Oversimplifying, these papers look to see whether financial assets that are more likely to pay off if one side wins increase in price as the likelihood of winning increases. Best we know, none has looked at bonds for the same issuer that have clauses that differentially impact how those bonds are likely to fare in a conflict. But if the price of an asset such as an oil future fluctuates as a function of the likelihood of Saddam Hussein losing the war in Iraq, it seems to follow that the prices of Russian bonds should reflect the differential in clauses that are explicitly meant to give Russia more leeway in the event of western sanctions – and this differential should be bigger as a function of the probability/severity of sanctions.

We can think of at least three ways to examine these predictions. For both the Russian Federation and Gazprom, we can compare bonds with and without the APC clause. And then, as a check, we can look at Russian ruble denominated bonds versus Russian bonds denominated in foreign currencies.

Working with Michael Bradley and Irving De Lira Salvatierra, we ran these comparisons. The results surprised us. A lot. Basically, here is what we find:

Now, for the main event. Bonds with the APC clause versus those without it.

Here’s a rough figure focusing on two sets of Gazprom bonds. A dollar bond with the APC (yellow) and without the APC (orange). And a euro bond with (blue) and without (red) the APC clause. It’s the opposite of what we expected.

To our investor friends, or our academic friends who study things like market predictions and foreign v. local currency borrowing, or our lawyer friends who understand the ins and outs of when contract clauses are priced and how—help us understand this please. We know we were completely wrong. But why? What are we missing?

The simple explanation is that the market realized that, given expected US and other sanctions, the Russian government was going to lose the ability to pay in dollars/euros/etc. That would block all payment on the foreign hard currency bonds. By contrast, there was at least a possibility that the Russian government would continue to pay (in rubles) both on domestic bonds and foreign APC bonds. And so even though it might prove hard to convert rubles to dollars after receiving payment in Russia, the prospect of some payment is better than nothing. But on the other hand, if it does turn out to be hard to convert rubles to dollars, or if the Russian government manipulates the exchange rate, then investors lose.  At least with a foreign hard currency bond, the investor has the full amount of their claim (albeit the unpleasant prospect of having to enforce it). To revisit our error, we thought investors would value the latter (required foreign currency payment) more than the former (dodgy local currency payment). The graphs above suggest the opposite.

However, there might be other explanations. Here are a few possibilities/questions:

We owe thanks to our co-authors on the larger inquiry, Michael Bradley and Irving De Lira Salvatierra. Thanks also to our RAs, Madeline Killen and Riley Ries for their superb work in digging through contract clauses. Prediction and other errors though are all ours.