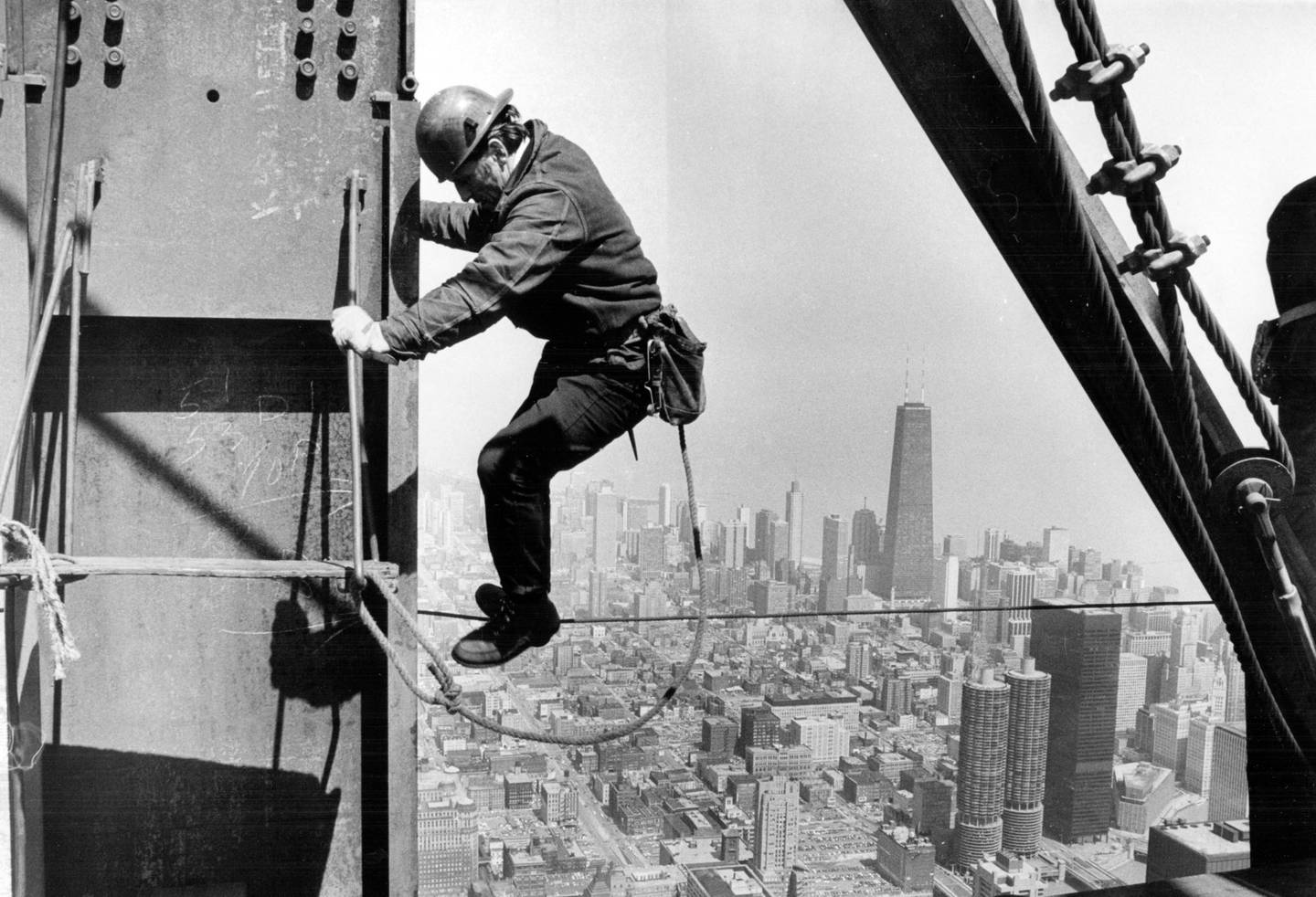 A history of Chicago’s tallest building

The Willis Tower was built with cutting-edge technology and ageless chutzpah, a word that could be translated as an intoxicating sense of omnipotence.

When planning for what was originally called Sears Tower — a name many still use — began, the company had 350,000 employees. Half of America’s households had a Sears credit card. The company’s future seemed to carry a lifetime guarantee.

“Being the largest retailer in the world we thought we should have the largest headquarters in the world,” Gordon Metcalf, its board chairman, said in 1969. His words echoed the Biblical account of what inspired the Tower of Babel’s builders:

“Come, let us build ourselves a city, with a tower that reaches to the heavens, so that we may make a name for ourselves.”

[Follow along with all of our 175th anniversary coverage]

By that standard, the Sears Tower was a success. The 110-story skyscraper at 233 S. Wacker Drive was the world’s tallest for more than two decades and remains popularly known by its maiden name, even though it was renamed for a London-based insurance brokerage in 2009

But Sears Roebuck and Co. has all but vanished. The Tower has had multiple owners, and its appeal was at least momentarily diminished in the months following the terrorist attacks of 9/11 more than 20 years ago.

Today the city’s tallest skyscraper faces the same pandemic-related issues as office buildings throughout the Loop as workers continue to work from home, throwing the continuing vitality of downtown Chicago into question.

Barclays Bank, a venerable British investment house, once posited skyscrapers as an economic forecaster. Its data crunchers said that cities build their tallest structures on the eve of their decline.

How accurately does that algorithm measure Sears Tower and the city it looks down upon?

In the beginning, the massive building gave a shot in the arm to its immediate environs. It replaced the unsightly remnants of Chicago’s garment district on the western edge of the Loop. “A jumble of 15 grime-blackened buildings,” the Tribune called it. Their demolition surely enhanced a visitor’s image of Chicago.

Sears Tower emblematized the staggering power of its corporate parent. As the high-rise was going up in the early 1970s, the company had about $9 billion in annual sales revenue. Its Tower was similarly voracious.

At 1,451 feet, it was the world’s tallest building and held that distinction for more than two decades. To reach that height required 76,000 tons of steel, 2.5 million cubic feet of concrete, 25,000 miles of plumbing, and 43,000 miles of telephone cable.

“On behalf of the people of Chicago I want to thank Sears for the confidence they are showing in the future in planning and designing the building which will adorn the West Side,” Mayor Richard J. Daley said in 1970.

Sears Tower spurred the redevelopment along the Chicago River’s west banks and in adjoining neighborhoods. But it didn’t ring the corporate cash registers. By 1991, Walmart’s sales had overtaken Sears’, which went through a long decline before filing for bankruptcy in 2018. The company sold Sears Tower and closed stores but couldn’t make a payment on the loan keeping it afloat.

Sears left the building for corporate campus in Hoffman Estates in the 1992, a move that bruised Chicago’s civic pride and complicated commutes for many employees. “How will I get there?” was the most asked question from staffers, recalled Barb Lehman, the Sears executive who directed the exodus of 5,000 from Chicago to suburbia.

Sears was founded in 1892 and virtually invented home shopping with a catalog as thick as Chicago’s telephone directory. It enabled rural families to enjoy the same consumer goods as their urban counterparts with access to stores. Sears provided the model that Amazon would later capitalized on, but it wasn’t nimble enough to adapt to the digital age.

Instead it focused on bricks-and-mortar stores, famed for replacing tools if they broke, and down-to-earth clothing and appliances. Their shelves reflected the same spread of good-better-best offerings as the Sears catalog.

Rival department stores specialized in a segment of the retail market: Marshall Field’s on high-end offerings and fashion-conscious customers, Goldblatt’s on inexpensive products and budget-conscious shoppers.

“Sears is like a dinosaur,” Joe Cushman who retired as Sears chairman in 1967, once observed. “You hit it five times on the tail with a sledgehammer, and 11 years later the impulse will reach the brain.”

His successors ignored Cushman’s diagnosis. Perhaps ambitious architects seduced them into thinking of Sears as too big to fail.

“Sears probably would have settled for a squatty 50- or 60-story building — something sturdy, efficient and durable,” said Fazlur Khan, the structural engineer who, with architect Bruce Graham, drew plans for the tower. “But we wanted something that wouldn’t be too prismatic.”

Khan was apparently taking a dig at the Loop’s more nondescript buildings, a mold Paul Gapp, the Tribune’s Pulitzer Prize-winning architecture critic, agreed they broke away from by designing a skyscraper “whose exteriors are a bold, vital, and exciting departure from orthodox mediocrity.”

After Sears cut its Tower loose, others bought and sold it, even when it teetered on a precipice of bankruptcy. Trizec Properties inherited Sears’ responsibility for loan payments due MetLife and, unable to make a 2003 installment, gave the keys to the building to the insurance company.

“There is some tarnish on the diamond now, but it will come back,” Kenneth Szady, an executive with the Trammell Crow realty company, told the Tribune. “And in the long run there is some potential upside.”

It was tempted to make the move in part by Chicago’s offer of about $25 million in incentives, the Tribune reported, while also noting: “United is drawing fire from aviation experts who question why it would locate its nerve center in a building identified as a potential target of terrorists.”

“You can completely forget about Sept. 11, but as soon as you go back into that building, you think about it again,” said Alain Coque, an executive of New Mark Co., whose clients were looking at office space in Sears Tower.

The Tower got an emotional lift in 2015, when the Blackstone Group bought it for $1.3 billion, a record for an office building beyond Manhattan. The New York private equity group softened its hard-edge persona with touches of color and a lower-level mall, putting $500 million into a renovation project dubbed the Catalogue. Restaurants, a food court, and shops reintroduced the Tower as more than just a place to work.

COVID struck as the project, just completed in May, was well underway.

Catalog, a newly renovated multilevel retail and amenity space inside Willis Tower, is seen on May 19, 2022 (Erin Hooley / Chicago Tribune)

“On Thursday between 8 and 9 a.m., Tribune reporters counted 75 people passing through its main entrance,” the paper reported on September 25, 2020. Before the epidemic, 15,000 employees arrived there daily.

So the story’s next chapter is unclear. Has working from home become the new norm? Management’s upbeat forecasts of the Tower’s rebound are diluted by unintended cautionary notes such as ballyhooing “shared workspaces.” That sounds like a franchised motel touting its business center rather than a sales pitch for an exclusive skyscraper.

It would be more convincing if the Tower’s flacks spoke with the authoritative self-assurance of Sears founder Richard Sears, who built an empire with his catalog’s no-ifs ands-or-buts promise of customer satisfaction.

Once he saw a trolley conductor drop his pocket watch, which was smashed. “Was it a Sears watch?” he asked. “Yes,” the distraught fellow replied. Whereupon Richard Sears handed him a new one, saying: “We guarantee our watches not to fall out of anyone’s pocket and break.”

Sign up to receive the Vintage Chicago Tribune newsletter at chicagotribune.com/newsletters for more photos and stories from the Tribune’s archives.