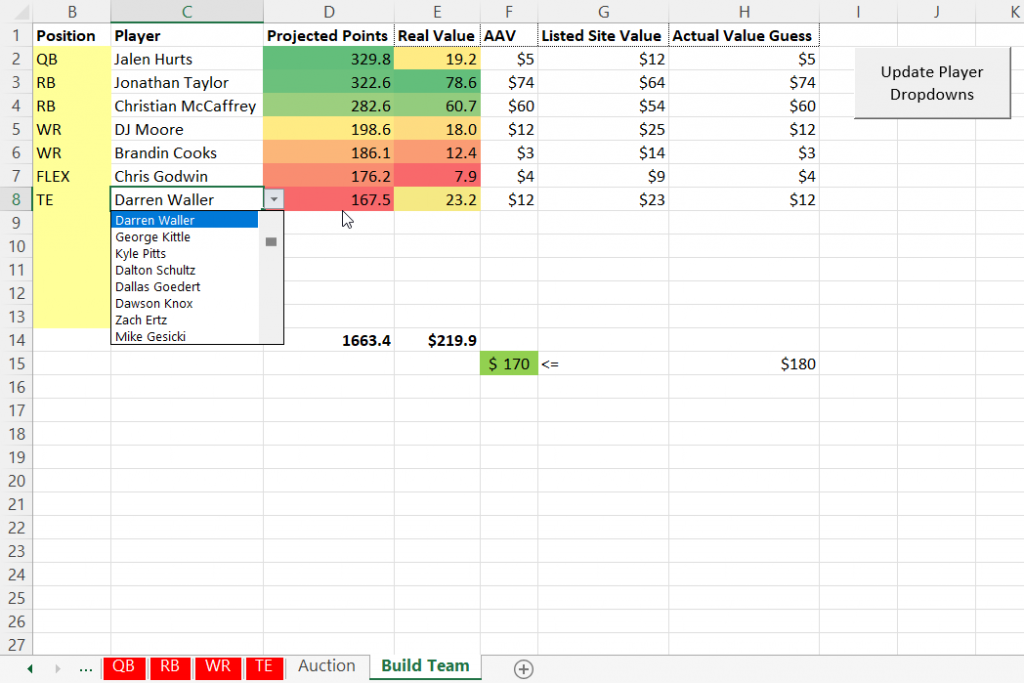 If you haven’t read parts 1 and 2 of this series, please click the links below. Part 1 includes an overview of my fantasy football auction draft philosophy along with instructions for downloading and setting up the Ultimate Auction Draft Pricing Tool. Part 2 will teach you how to analyze the data from the tool and form an initial draft plan position-by-position.

Part 2: How To Dominate a Fantasy Football Auction Draft – Developing a Game Plan

You’re almost there! You’ve gathered all the data, generated custom dollar values for every player, and synthesized the information into an initial draft plan, with strategies for each position. You’re almost ready to dominate your fantasy football auction draft.

But first, you must complete the final phase of pre-draft preparation: building a comprehensive, flexible draft budget.

Our overall philosophy: stick to your positional budgets, but keep in mind the players and tiers you’d accept within the $ amount you’ve set. You have your playbook, but prepare those audibles to adjust on the fly.

Reminder: all the following screenshots and analyses are based on a 10-team half-PPR league using Yahoo AAV data. Your league might be different, so the goal of this series is to teach you how to analyze any set of data and come up with conclusions. Read part 1 to download the spreadsheet and learn how to customize the tool to your league settings.

Based on my analysis in part 2, my initial plan is to draft Jalen Hurts or Kyler Murray at quarterback, two high-end running backs, three mid-tier wide receivers, and George Kittle or Darren Waller at tight end. The Wolf approves this method, although he also recommends considering THREE high-end RBs and filling in the blanks, given the depth at the other spots.

Regardless, here’s the sample starting lineup I came up with:

I usually like to spend about $170-$180 on my starting lineup. I wanted to leave some extra breathing room since I am going after two extremely high-end players, so I planned for the low end of that range. Drafting solid receivers like Cooks and Godwin instead of $1 bums is also critical to this strategy, so I’d rather be safe than run out of money at the end of the draft. This is more of a personal preference, but I have found by experience that $170-$180 strikes a good balance between buying the best starting lineup I can afford while saving enough money to target my favorite sleepers late in the draft.

Beyond planning to spend the remaining $20-$30 on the bench, I don’t like to specifically budget for my bench before the draft. Depending on how my starting lineup shakes out, I could end up with anywhere between $10 and $30 to fill out the bench, which would result in drastically different bench strategies. Also, bench needs are different depending on your starting lineup. I like to make a list of cheap players to target late in the draft and grab as many as possible with the money I have left.

Wolf’s Take: On 16-man rosters (10 starters, 6 bench), I typically only reserve $10 for my bench, at most. I blow it all on starters, as each draft typically becomes a “snake” at some point. While commanding the later stages of the auction is nice, I am 100% “stars and scrubs,” with about $180 reserved for just my WRs and RBs.

Since we already have a sample lineup, building our initial budget for each position is very easy. I can simply add up the cost of each position. As discussed in part 2, I assume a wide receiver will be drafted to start in the flex position, although The Wolf recommends three stallions if possible.

For my construction, our initial budget looks like this:

To make this easier to visualize, check out the Build Teams sheet. Select the positions your league starts in column B, and column C will automatically populate the list of players eligible to start at each position. Be sure to click the “Update Player Dropdowns” button after making changes to column B to refresh the dropdown lists in column C.

While our first budget is a useful starting point, the flexibility we have at each position is unclear. We know we won’t leave the draft with these seven players for these exact prices. Drafts are unpredictable. Plans change.

The main risk we need to plan for is all of our top running back targets selling for significantly above their AAV, which does happen in some leagues. If our chosen QB, TE, or WRs sell for significantly more than their AAV, we can easily replace them with a player of similar value. However, at running back, we don’t have as many alternatives. Derrick Henry and Alvin Kamara would be my top backup options, but all other top backs are significantly overpriced. Due to the lack of alternatives, our budget needs to change if all of the top backs sell significantly above their AAV.

We need to test how flexible our budget is in other areas to determine the maximum amount we can spend on the running back position. The top backs will usually be nominated early in the draft, so our decisions at running back will affect the entire draft.

Wolf’s Take: Still: hold true to your original budgeting philosophy. If you went in planning to spend on RBs (like you should), don’t suddenly switch up because prices are higher than expected. Adjust accordingly, by mapping out audibles ahead of time, to help you adjust in real-time like the below examples.

For simplicity, I will assume that we are going to keep the same quarterback and tight end in each alternate scenario. Kyler Murray is our main quarterback alternative, and George Kittle is a great backup option for our TE, so I’m not as worried about those positions.

Our budget for each alternative scenario should not exceed $180. We have $17 already allocated to the quarterback and tight end positions combined. Given these assumptions, we have $163 to allocate between running back and wide receiver.

We normally would plan to spend $134 on the combination of Jonathan Taylor and Christian McCaffrey. But because we are planning for a scenario where our running back targets sell for more than expected, let’s assume Taylor will go $15 above his AAV, and McCaffrey will go $5 above his AAV.

If we still want to draft Taylor and McCaffrey, we would need to allocate an extra $20 to running back to account for the price increases. That would bring the running back cost to $154, leaving just $9 for three wide receivers. If $9 is the minimum you are willing to spend on your three receivers, your max running back budget is $153. If not, you can experiment by plugging in players with different values until you find your breaking point. For $9, I can get Allen Robinson, Brandin Cooks, and Marquise Brown.

We want to determine our maximum running back budget, so let’s now assume each top-5 back only sells for $5 above their AAV. Should we still get two top backs?

Since we already had $10 of extra cushion in our original budget, we don’t need to change anything. We can still draft Taylor and McCaffrey for $144, and spend the original $19 we budgeted for receivers to stay within the $163 limit. The more slack you build into your initial budget, the more likely you can simply stick to it rather than having to call an audible.

Given the original assumptions of a $15 price increase for Taylor and a $5 price increase for McCaffrey, if we want to increase the receiver budget from scenario 1, we must downgrade at running back. Alvin Kamara stands out as a good value replacement for Taylor given the data, and making the change gives us $58 to beef up the wide receiver position. For $58, I can get Mike Evans, DJ Moore, and Diontae Johnson.

As you can see in all three audibles, we stuck to our guns from our initial game plan and remained RB Heavy in expenditure.

Still, like the best NFL teams, we found productive ways to audible, and take what our “opponents” were giving us and use it to our advantage.

All three scenarios still fill our running back and wide receiver starters with top-60 players, the range where most league-winners come from. If you are getting players you like for nice values, any scenario is ideal. Rather than blindly maximizing real value, try to find lineups filled with your favorite players that also have favorable prices. Setting maximum budgets is as much an art as a science.

Another benefit of audibling: you might discover tweaks to the initial game plan and budget. For example, I prefer scenario 3 over scenario 1, so I know my maximum RB budget is less than $153. The wide receivers from Scenario 1 aren’t horrible, but if my favorite $3 wide receiver targets went for a few dollars more, I would be in a tough spot. The last thing I want is to overspend and get stuck with $1 players to fill out my starting lineup.

Scenario 2 still looks appealing even though I had to pay $144 for both backs. I could test more scenarios, but $19 to spend at WR feels very close to my minimum number, so I will set my maximum running back budget at $144.

My budget is now much more actionable. If I win McCaffrey for $65 in the real draft, I know I don’t want to spend more than $79 on Taylor to stay within the $144 limit. I can comfortably avoid overspending on my second running back now that I have a specific number in mind.

I encourage you to formulate your draft strategy, identify the threats, and use the tool to build contingency plans. Every draft strategy is different and comes with unique risks, and the tool can help create audibles and backup plans for any scenario. With proper planning, nothing will stop you from dominating your draft!

Congratulations, you are now a master of auction pre-draft preparation! You went from inputting some basic ADP data and league settings in part 1 to learning how to plan for threats and develop flexible budgeting strategies. You should be proud. Stay alert for part 4, the final part of the series, where I reveal my best in-draft tips.

Our Auction Series is all you need to dominate your 2021 Fantasy Football Auctions. Don’t miss a single part: